Apologies for the hiatus...

I haven't been keeping up with my blog like I've wanted to lately and I apologize for that. Some chronic lower back issues have kept me away from lots of things I enjoy, but I'm doing better the past week or so and hoping to get back into the swing of things (woodworking, working out, home improvements and repairs).

I'll be traveling for a few days this next week and I'm bringing along an old-fashioned blogging system (pen and a journal). I'll have to transfer data upon my return but I hope to have something for you to read when I get back.
Posted by Ethan at 11:48 PM 2 comments:

A Forgotten Project Gets Remembered... 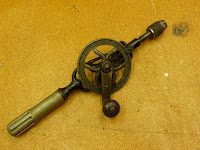 A few months ago, before I started the whole basement shop rebuild, I'd started working on a fixing up an old egg beater drill I found at an estate sale for $3. It isn't quite as good a quality as my other hand drills - it does have a rosewood handle on the turning gear, but the main grip is a gold-colored metal (though it does unscrew to allow for drill bit storage) - but it didn't look to be in too bad a shape and I figured I could clean it up and give it a way to another woodworker who might need it.

Well, I'd started on it back then but got distracted with something or another and forgot about it. This evening, I stumbled across it again as I was sorting through some tools to start thinning some chisels from the collection and decided to take a half hour to finish it up.

Unfortunately, I didn't remember to take any pictures of the first part of the process, which was to remove the chuck, disassemble it, and clean up the three jaws. They had about a hundred years of grime, gunk, and build-up in them and the action wasn't as smooth as it should be. The only caution I would mention with this part is to wrap something around your vice clamps or pliers to make sure you don't mar any parts of the chuck when you disassemble it. Oh, and remember to unscrew it the right way - lefty-tighty, righty-loosy in this case. 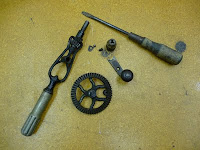 The next step was to disassemble the rest of the drill. This one came apart quite easily - one screw removed the handle and one screw removed the little tab that holds the main gear in place. After it was disassembled, I got out an old toothbrush and some low-odor mineral spirits and started scrubbing everything down. I went after some of the tougher spots with the green scouring pad.

After a bit of work, alternating between the green pad and the old toothbrush, I could see more detailed information about the drill. (Forgive my lack of macro pictures - the new camera doesn't have very good macro capability.) I found two marks of interest. On the chuck, I found a patent date of 1895. On the handle, I found an image of an oak leaf with the words, "WmEnder Oak Leaf" inscribed inside it.

A little internet searching turned up a small amount of information on William Ender. He worked for Simmons Hardware Co., a St. Louis-based hardware company(looks like this drill hasn't traveled very far). You might be more familiar with Simmons' Keen Kutter line of products. Ender was a V.P. in the company and developed his own line of products under the Oak Leaf name. I found an old court document in my search where William was listed as a witness in a legal action Simmons had against the city of St. Louis in 1917, so this drill probably dates to somewhere around that time. I say this because once he left Simmons, he marketed his tools under the Ender product name and not Oak Leaf. 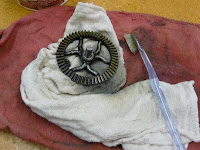 Anyway... I continued scrubbing the drill with the toothbrush, making sure to clean up the teeth on the gear. Here you can see part of the drill sitting on a distant cousin of Chris Schwarz's affectioned "Woobie". I've only ever used this red rag in the process of cleaning old tools, however, so I'm not sure I would want to wipe down one of my hand planes with it before I put it away. After removing a lot of dirt and gunk, I was down to bare metal in several places. Maybe I'll take the time later to more aggressively scrub it and apply a new coat of paint, but for now a good cleaning was enough.

I put a bit of grease back in the hole where the gear spins, threaded the chuck back on, screwed the tab and handle back on and chucked in a drill bit to give it a test. The action on the chuck is a lot smoother now and the drill spins very easily. A test hole in a scrap of mahogany provides evidence of its function. 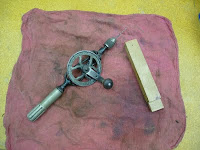 This was a quick, easy repair project and a fun way to take $3 and turn it into something very useable in the shop. Breathing life back into an old tool is also a great way of "going green", if you're into that sort of thing.

After a bit of pondering, I probably will take the time to disassemble the drill again, scrub it down even more and repaint it a gloss black (the original color, per the remaining paint I can see) and then give it away to someone. If I actually do follow through with that idea, I'll be sure to post a comparrison picture or two.
Posted by Ethan at 10:23 PM No comments: