Working With Wood In A Different Sort Of Way... 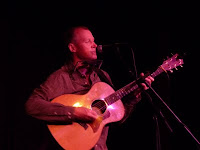 I have to start off by saying Jim Malcolm was in brilliant form last night. Not only is he a great singer, song writer, and musician, but he also has a great sense of humor. This year he added a bit of theatrics as well, coming out on stage for the second half of the show dressed up as Robert Burns.

I don't really have any good photos of him, however, as I tried to avoid taking any pictures with the flash on - I'm sure it is distracting when you're up on stage. This is the best of the lot, honestly. I recorded video of a few songs with Dana's digital camera, but the quality and sound isn't as good as if taken from a real video camera, so haven't yet decided if I'll post them on YouTube or not. 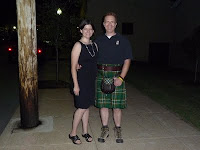 I was excited for the chance to wear a kilt - I went with the Irish National tartan this time. The sporran is a custom Thorfinn by Turpin Ballard, in case anyone is wondering. Thorfinn sporrans are designed to have interchangeable flaps so you can get one made to go with every kilt you own. I need to try and sniff out a bit of some Ancient Campbell of Argyle tartan so I can have him make a sporran flap to match my other kilt, too.

Anyway, if you like Scottish folk music and you ever get a chance to see Jim Malcolm in person, don't pass it up. I've already seen him two or three times (three, if you count the time I saw him when he was singing for Old Blind Dogs) and I'm sure I'll see him again.

Now on to woodworking in a different sort of way...

I didn't get any shop time in today. Instead, Dana and I decided to do a bit of necessary work outside. For about two years now, we've been talking about planting a few more trees in the yard. Hey, I'm all for anything that reduces the amount of grass I have to mow. But the question is, what do we plant? We're both very interested in having a yard filled with native plants and trees, so that always plays an important part in our decision.

And we always take a long time making what we consider to be "big" decisions. That said, we've probably over-done the thinking part of this project. We've been to a particular nursery near our house so many times they know us as the "Grow Native" couple who hasn't bought anything yet.

Ah, well. That changed today with our purchase of a service berry tree and a beauty berry bush! The service berry tree normally has yellow leaves in the spring and summer and then turns bright red in the fall. It produces black berries a lot of native birds use for a food source. This tree will also be a good between-bites perching point for our bird feeder on the east side of the house. The beauty berry bush produces light purple berries many native birds also enjoy and, once it is full grown, it will become a resting place for birds using the feeder on the south side of the house.

We were initially going to just buy the service berry tree, but I wanted to take out a Japanese plum tree the previous owner planted way too close to the southeast corner of the house and replace it with something I wouldn't have to trim up twice a year. So we bought the bush, as well.

When making the purchase, the owner of the nursery convinced me I could plant the service berry tree myself. Had it only been three feet tall, I wouldn't have even considered paying someone else to do it, but we wanted to go with something a little more established. The tree we bought has three main trunks and is roughly six feet tall. But in the interest of saving about $75, I thought I would go with her advice and give it a try. 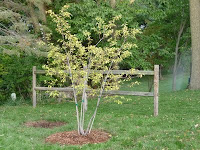 Since the soil in our area is... well, non-porous would be an accurate description... I had to modify the planting technique a bit. The hole needed to be just 1/2 to 3/4 the depth of the potted tree and then 2 or 3 times the diameter of the pot. The Missouri Department of Conservation suggests the top 12" of the root base are the most important, anyway, as that is where the biggest portion of roots draw in the largest amount of nutrients.

So I dug the hole to size and mixed a large amount of the good soil removed from the hole with a bag of clean soil and several gallons of our very own compost. We positioned the tree in place, cut away the plastic pot, and alternately watered and filled in the hole until it mounded up to the top of the root ball. A few inches of cedar mulch helps keep it from drying out too fast. 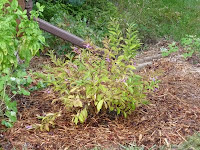 While I was working on the service berry, Dana pruned down the Japanese plum and started trying to dig out the root ball. She took a short break to help me backfill and water around the service berry and then I joined her, digging and clipping away until the root ball popped out and we had a 2' x 3' hole by the corner of our house. Planting the beauty bush went just about the same was as planting the service berry, only the hole wasn't nearly as big. Again, I got to use some of our home-made compost, which was such a great feeling, and again we finished it off with a few inches of cedar mulch. This variety shouldn't get but 4' or 5' tall with a total diameter of about 3' to 4', which is just perfect for this distance from the house.

While I didn't get a chance to work on my inlay pieces today, I did, technically, at least get to work with some wood. And it felt good to get outside and make some changes to the yard we've wanted to do for some time.
Posted by Ethan at 11:07 PM No comments:

I want to try out a new inlay idea on some of the boxes I'm making. Pretty soon I have to start getting ready for a Jim Malcolm concert, but I did have a little time this afternoon to get down into the shop and work on the first few steps, so I thought I would share that with you.

After laying out cut-outs of my idea on paper, I went through my stock to choose the wood I was going to use. I narrowed it down to holly (very white and with practically no grain) and then either bog oak or blackwood. The blackwood really has the darker color, which is what I'm ultimately looking for, but the blackwood I have would limit the size of my inlay. I think the bog oak will be dark enough once I add a little bit of boiled linseed oil to it, and it would allow for two pieces of inlay in the larger dimensions I wanted.

In the end, I couldn't decide, so I went ahead and prepared both of them. I'm always up for trying new things out and this seemed like a great opportunity to play around.

I already had my blackwood and bog oak thicknessed so I just needed to get a piece of the holly prepared. I didn't take any pictures of it, but you didn't miss anything. Since it was the first time I'd used the board, I took my Stanley #6 and jointed one edge. Then I used the tablesaw to rip off a strip that was about 1/8" thick. I cut a section off the strip that was the same size as the blackwood and then cut another section off that was a tad longer than the bog oak. 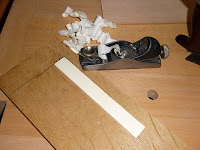 The setup here is a piece of oak board (unfinished wide-plank flooring, in case you are wondering) with two brass screws sunk just shy of flush. I pressed the holly up against the screws and then planed towards them. Pressure keeps the strip in place. It didn't take much to get me down to 3/32" thick. 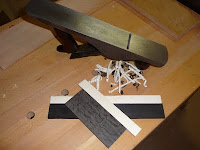 Then I needed to joint all of the matching edges. As you might have seen before, I like to do this with a Stanley #5 turned upside down on my bench. With that setup, I can easily run the strips of wood over the plane with control. I don't generally use any guide blocks to make sure the edge is exactly 90 degrees - you'd be amazed how well your mind can figure it out on its own.

After just a few minutes, all four pieces were jointed. If you're new to planing, this kind of work makes you feel REALLY good. It doesn't take much to get a small pile of curly shavings collected under the plane.

The only other thing I had time for today was the glue-up. Since this is inlay, and once I have it in the box there will be no stresses applied to the joint, I just needed to lightly clamp the pieces in place for a bit. 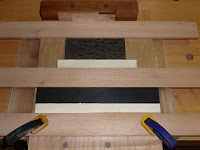 After a little thought, I accomplished this with the use of my bench hook. I pushed it into place on the bench, covered it with a piece of waxed paper, and then clamped a strip of wood parallel to the fence of the bench hook at the far end. With the addition of two filler strips (these three pieces are spanish cedar, waiting around for another project) and two shims I grabbed from my toolbox, I was ready to go.

I glued up the inlay pieces, set them into place, and then used the two shims to wedge the filler strips tight against the inlay. Again, I just need a good enough glue joint to keep everything together until I get it inlaid into the box, so I just tightened up the shims with hand pressure.

I'll let this sit for a day while I get kilted up for Jim Malcolm and hopefully I'll find some time tomorrow to work on the next part of the inlay.
Posted by Ethan at 4:53 PM No comments: