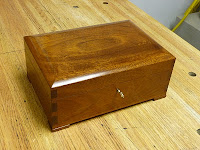 On Friday, March 19th, six members of the guild met up with Frank Klausz for dinner at the Soulard Restaurant. The beer was tasty, the food was rich, and the conversation was daunting! Frank is anything but shy and his speak-your-mind approach to everything in life is refreshing, if not intimidating. If you ever get a chance to eat dinner with Frank, don’t pass it up.

The next morning, 15 guys showed up at the St. Louis Woodworking Academy, most unsure of what to expect, ready for two full days of hands-on instruction from Frank. Except to say we cut our pins first, I won’t bore you with the details of making hand-cut dovetails. If you want to learn how to do it the Frank Klausz way, then you should pick up his DVD on How To Make Hand-Cut Dovetails or you can find detailed descriptions of his technique in the September 2005 issue of Popular Woodworking magazine or in the book, Hand Tool Essentials, also published by Popular Woodworking. 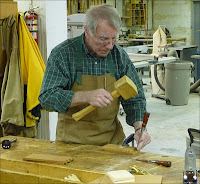 I would be remiss, however, if I did not point out a compliment Frank mentioned several times during the class (and even once after the class when talking to Wayne Watson, the guild V.P.). The benches we used were not the best suited for hand tools. In most cases, we had two woodworkers to a bench and the one vice on each bench either didn’t work or was of such poor quality it was unusable. But after Frank demonstrated the technique for cutting dovetails, and gave us scrap wood to practice with, we all went back to our benches and figured out how to make it work. Not one person complained about not having a vice – people either shared what good vices we had or people made their own set-up with clamps. Frank was really impressed with our ingenuity and ability to adapt to the situation.

By the end of the first day, 15 people had 15 boxes (though they weren’t all quite the same size) assembled with hand-cut dovetails. We let them sit overnight to allow the glue time to fully cure. On day two, we leveled the sides, shaped the lids, and cut off the tops. Frank showed us how to add the hinges and lock and we ended the class by discussing his suggested finishing techniques. 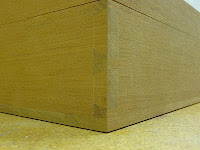 Hey, those are some pretty good hand-cut dovetails!

I really enjoyed this hands-on class, much more so than any of the lecture classes I’ve attended over the years. Some people learn better by reading and listening and others learn by doing – apparently I’m one of the latter. Though I do see the reason for and a need for lecture classes in the future, I also look forward to the next hands-on class sponsored by the guild.

I don’t expect we’ll see any finished boxes in the April 2010 guild meeting, but I do expect to see a few in the Show and Tell portion of the May meeting!

(By the way, that first picture is Frank's box, not the box of anyone in the class. I took some pictures of it for inspiration.)
Posted by Ethan at 9:43 PM 2 comments:

One would think seeing such a display in an in-box would bring tears to the eyes of the average woodworker. I mean... an e-mail from Konrad Sauer could very likely mean some type of infill smoothing plane is in the works, right? And who doesn't want to hear from Chris Schwarz on a lazy Friday morning? Or any morning of the week, for that matter.

Alas, the Konrad and Chris in the in-box displayed above are not the plane-making and woodworking gurus you might be thinking of. In this case, Konrad is the Team Lead of a report-writing division and Chris is a member of a technical support team at the software company that keeps food on my table. And I work with these two quite often in my capacity as a software support specialist.

But up until this last week, I hadn't seen their names so close together. To be honest, as I stared at my in-box, wasting a few minutes of my day thinking about what I'd rather be doing, I did find a tear in my eye...
Posted by Ethan at 10:56 PM No comments: