There Is No Such Thing As Coincidence...

So yesterday I received the check from Popular Woodworking for my End Grain article.

It just happens to follow my signing up for the $300 Chris Schwarz/Thomas Lie-Nielsen handplane class in April at Marc Adams Woodworking School.

Coincidence? No... I think not. More like fate!
Posted by Ethan at 1:59 PM No comments:

And Now I Can Talk About It...

In an earlier blog, I mentioned the present I'd made for someone on my wife's side of the family for Christmas. I couldn't talk about it at the time because the gift had not been presented yet.

It has since been presented. And now I can talk about it... 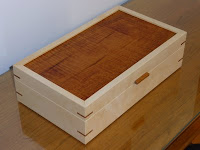 Unfortunately, as I was making this box along side the other box mentioned in a recent post, I don't have in-progress shots for this one, either. I guess my problem is that I don't think of writing several blogs for just one project. Ah, well. Maybe next time.

This project started out, as most of mine do, with one piece of wood. In this case, it was the curly mahogany lid - a board I picked up off eBay, along with some other similar-sized panels.

I enjoy buying from this seller. Since it is eBay, I can occasionally get a good price on some interesting wood, but mostly it is because he lives about seven blocks away from me, as the crow flies, and I can pick up my winnings on the way home from work, thus avoiding any shipping costs.

The maple compliments the lid quite well and I followed the curly mahogany thread with the keyed miters, lid lift, and internal dividers. I try to keep my boxes a little more on the simple side; it is purely opinion, but I've never found much attraction to the box made out of seven different species of wood. 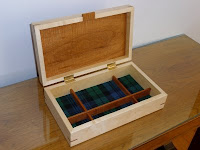 I've recently decided to go "all Brusso" on my hinges. They are a little more expensive (ok, a lot more expensive), but they make up for it in ease of installation and in quality and I like the built-in 95 degree stop. I can usually save a bit more on them if I wait for WoodCraft's bag sale and get a 15% discount on whatever I can fit in a brown paper sack - that's when I clean out what butt hinges they have in stock.

(My wife always laughs when I say "butt hinge"... and she calls me the childish one!)

The inside of this box is the second I've lined with wool tartan and I'm highly pleased with how it turned out. This particular piece of Ancient Campbell tartan (with lots left over) came to me via my mother-in-law, who picked it up in Scotland when she was there in the 1960's. I quickly decided I wouldn't try centering the tartan pattern in the box. It doesn't have to be off by very much to look bad, so I just make sure the tartan stripes stay parallel to the edges of the box.

The completed box went to my wife's uncle, Kevin. He seemed quite pleased with it. Although some of the construction was a bit tedious, given my workshop conditions and the time of year, the hardest part was bringing it from Saint Louis to Ohio, unscathed, on an airplane.

My only concern with this box is that I've set a precedence for future Christmases. On my wife's side of the family, we draw names for one gift to give under the guise of Secret Santa. Last year, I turned a cigar pen out of bog oak (and I thought turning osage orange was difficult!) for one of Dana's other uncles, George. I believe I one-upped myself with this box.

I suppose I'll have to maintain the status quo next year, won't I? On a bright note, unless we start driving up for Christmas, I'm at least limited by size in that it has to fit under the seat in front of me on the plane.
Posted by Ethan at 9:58 PM 4 comments: