Yesterday evening, Mike and Joe came over to evaluate the basement workshop space and figure out what they would need for materials to tape and mud the drywall for me. After about 15 minutes, Mike came up with a price and a material list for me to purchase. I agreed to the price and later on that evening ran over to Home Depot to pick up six 10' sections of beading and two 10' tear-away strips along with about 100 lbs of compound (some light purpose and some multi-purpose). 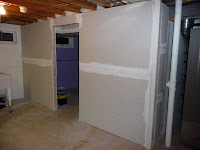 This evening, they came back over to start putting up the corner beading and apply the first coat of mud. They were just about dead on with the material measurements as it doesn't look like there was more than two or three feet of corner beading left over (you can see it to the right of the buckets in the second photo).

Mike said it will probably take two coats in most areas, but an additional coat might be necessary in some places (some of the ceiling joints). At the most, this looks to be a three-day job. Maybe that means I'll be able to prime walls for paint this weekend! Right. Most likely, I won't have time to do anything until some evening next week. 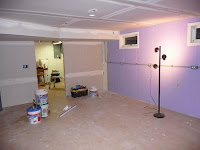 So far, things look good. It is nice to see it all coming together. Once the taping and mudding is done, I'll be able to prime and paint those danged purple walls! Oh, and I've already purchased my main ceiling lights, so I'll be able to install them after I'm done painting.

Unfortunately, I won't be able to do much more after that, due to low funds. And I won't really be able to get more funds until later in the fall when my Business Journal editing picks up again. In the mean time, I'll bring my bench and some of my stationary tools into the shop to get a feel for where I want them set up (well, and start using them).

In the mean time, in lieu of flooring I'll probably end up swinging by the local farm supply store and picking up some horse stall mats so I'm not standing on concrete the whole time I'm working in the shop. When I do get around to putting down a floor, I can still keep the mats to use in front of the bench and cabinets to help protect the floor from the worst of whatever I might do to it.

I'll try to take a few pictures and post an update after Mike and Joe are done and I've spent a little time cleaning up.
Posted by Ethan at 10:28 PM 2 comments:

Some time during my third year of college, a friend of mine introduced me to Wallace and Gromit, claymation comedy from the U.K. It didn't quite meet up to the standards of Ren and Stimpy or the soon-to-be-released South Park, but it gave them a good run for their money. The lines Wallace had (especially about the cheese) were simply the best, though, and I wouldn't pass up the opportunity to watch a bit more if it came along. 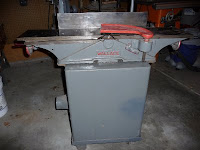 But for now, I must placate myself by introducing you to a different Wallace. Fellow woodworkers and bloggers, meet my new Wallace 8" jointer...

This Delta-gray and slightly dusty machine comes to me by way of Craig's List, one of the best inventions of man since eBay. It wasn't necessarily what I would call a "steal", but for an 8" jointer, I think it was a pretty good price. Besides, I think the old adage that they don't make them like they used to can be most often applied to woodworking machines. This machine, coming from the late 1930's/early 1940's (most likely - I plan on researching it as much as possible in the coming weeks), is now my oldest, pushing my 1950 Rockwell Drill Press into second place.

Here's another way of looking at it... this is the epitome of "green woodworking"! I'm taking something that was made more than seventy years ago and renewing it and putting it to good use! So really, this is my way of doing my part to help save the planet. 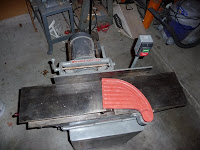 It sits on a mobile base that originally came from a Delta 8" jointer. The previous owner (well, his dad, really) made some slight modifications to accommodate the Wallace. It seems quite comfortable there. The engine is not original - it is a Dayton 1hp single-phase (1725 RPM) motor. It is also not currently hooked up as I took these pictures after unloading it from the truck.

Due to work constraints, I wasn't able to get to the seller's house until some time after 7:00 PM this evening. So by the time we got it loaded, watched two B-1 stealth bombers fly a couple of routes overhead while making an appearance at the MLB All-Star Game, talked a bit about all of the old iron I saw around me, and finally made it back home, it was close to 9:00. While supper was cooking, I quickly ran outside to figure out the best way of getting the jointer and base from the back of the pickup without putting myself into the back of an ambulance. 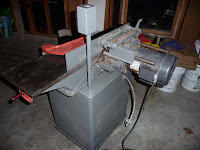 In the end, I decided to take the mobile base out first and set it up. Then I could drop down the tailgate, push the base up to the gate, and slide the jointer off the gate and onto the base. It worked like a charm! It might have taken me less time to unload than it took to load!

The paint job looks good. The fence and beds seem to adjust properly.Hopefully, all I'll really need to do to get her back up and running at full speed is to sharpen the knives (or replace them).