The power of the written word... 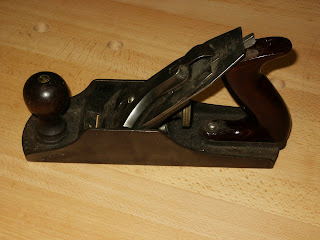 Last week, a new smoother found its way to my shop. It will be my sixth workable (I have one or two part-out planes laying about) plane, but being a Bedrock 604 1/2, it currently holds the limelight on my bench. Hopefully, I'll be able to tune it up into a wonderful user.

It actually didn't look too bad upon arrival. A dusty tumble weed, similar to those my youngest cat leaves on the floors, clung tenaciously to the frog adjuster. A coat of grime covered the bed, lever cap, breaker, and iron. The tote looks to be a replacement (either that, or the previous owner figured out some way of using the plane by only gripping the knob because the tote had a clean finish on it while the knob was quite worn). The sole was quite flat, though it could use with a lapping just to clean off some of the grime. 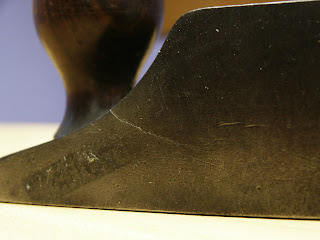 So why are my aspirations so low? Why would I be content with having this wonderful plane as just a "user"? It's one fault - a small, but stable, crack in the left cheek. The patina of the crack leads me to believe it has been there for quite some time.

Regardless of how long it has been there, the crack prevents it from being a serious collector's plane. That means two things to me...

For starters, it meant I was able to pick up a good usable smoothing plane for not a lot of dough. But the other thing it means is that I don't really have to worry about preserving its appearance or messing up its intrinsic value by "restoring" it incorrectly.

I didn't want to do too much to this plane right off the bat. I disassembled it, wiped down most everything with mineral spirits, removed the sticker residue (from the price tag and the indicator showing the crack in the cheek) and scrubbed off the grime with an old soft bristle toothbrush. Next I broke down the iron and chip breaker to check out their condition. They looked good - nothing a little sandpaper and some more mineral spirits wouldn't fix, though I could tell from looking at the blade that it had never been properly tuned.

After removing any gunk from the knob, I wiped on a few quick coats of garnet shellac to bring it back to life and sanded the top of the brass screw caps in the knob and tote to get them shining.

I decided to leave the sides un-lapped for the time being. I'm not sure how much I want to tempt fate by messing with that crack. I actually have yet to lap the sole, though I plan on doing that in the immediate future. I did, however, work on the blade. I started with flattening the back on my 220 DMT diamond stone. Twenty five minutes later, I was still working on flattening the back! I later determined I was able to save enough of the metal filings to reforge them into a spare blade for my block plane... 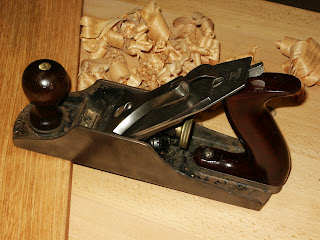 After most of 40 minutes, I had the back worked up to the 2000 grit water stone and started working on the bezel. That went much faster.

After a final honing on the king water stone, I assembled the plane and pulled out a small board of mahogany to give it a whirl. I still need to mess with it a bit (as previously mentioned, I do want to clean up the sole just a touch), but with very little effort, I was able to get some nice shavings, as you can see...

So I guess you want to know what I paid for it?

This plane was set down on my door step for $47 delivered. Not a bad little deal, if I do say so myself... Looking forward to putting it to good use.

(And much thanks goes to Chris for the quick and sound advice on picking up a sweet deal when I see one.)

(Even more thanks to Clarence for the sweet deal!)

How did I get such a great deal? I wrote some letters. They weren't long letters, and they weren't fantastically brilliant letters, but they were clearly written and to the point. I sent inquiries out to about ten or so tool dealers, letting them know I was in the market for a good user smoother plane and wanted to know if they had anything available that would be useless to a collector but very useful to someone who wanted to actually use it to smooth wood. A week after I sent those letters out, I got the reply from Clarence about my new 604 1/2.

Not a bad result from five minutes of writing...
Posted by Ethan at 11:31 PM