It's About Bloody Time!

Does it ever seem like you just can't find the time to do the things you REALLY want to do? Between the regular job and the part-time job and getting ready for Christmas and trying to take care of all the house chores, it seems like I haven't done any woodworking in forever!

But over the past few weeks, I've been able to sneak into the shop (and garage, since the "shop" doesn't really exist yet and I'm using the space in the basement where the previous owner had his shop situated) to work on some Christmas presents. One of them is a present for someone on my wife's side of the family, so I can't really talk about it yet (per some of them read my blog...). I'll be sure to post some pictures of that post-Christ's Birthday. The other is for a guy in Alabama who was directed to me, either by searching and finding my old website or through an acquaintance in Scotland who has directed people my way before. He wanted me to make a sgian dubh box for someone for a Christmas present (I suspect his father).

It was a bit short notice, but I figured I'd be able to fit it in, since I would already be making something for the aforementioned family member and it's easier to work on two projects at once when you have all the tools out and the shop-time motivation going at full steam.

I struggle with in-process photos and for that I do apologize. Even if I remember to bring the camera into the shop with me, I usually forget to pull it out until after I've completed most of the process. I do, however, usually get a few shots off before I send the box to the new owner. 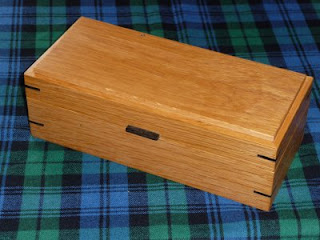 Lately, I've been trying to do what I call "recycled" woodworking. All of the wood in this box was reclaimed from other sources. The white oak sides, bottom, and lid are all 100 year old sheathing from an old house my brother and I dismantled on the family farm. A friend of mine dimensions it for me, which he doesn't mind doing because this wood was found between the framing and the clapboard siding and thus protected from the elements. Before it is cleaned up, it really just looks like old wood - no graying or weathering of any kind.

The other wood I used in this box is reclaimed bog oak from England. This wood comes from Roman-period Londinium (present day London). It is oak that was used by the Romans to make piers along the Thames river. Since then, the river has shifted course by several hundred yards and the wood was preserved in a bog-like atmosphere. The tanic acids in the oak react with the chemicals in the oxygen-poor bog and preserve the wood while turning it a wonderful dark black.

It is hard to come by and expensive to ship over from England and Ireland, so I use it sparingly. In this case, I used it in the mitered keys and the lid lift. I would have liked to inlay some into the lid, but I just ran out of time.

Although I use some power tools for things like dimensioning the wood and cutting the grooves for lid and bottom, I used hand tools for fitting the hinges (Brusso butt hinges with 95 degree stops) and the lid lift. I recently picked up a Record 043 and a Record 044 plough plane, so in the future I'd like to cut the grooves by hand, as well. I just haven't had time to get the blades sharpened up and play around with them a bit to make sure I'm good with the techniques. You don't want to practice that on a time-limited project!

But I did try out something new I've wanted to do for a while. The sgian dubh is the small knife worn in the kilt hose, generally going along with a full kilted outfit. I usually line my boxes with suede cloth or green felt or some such thing, but recently I thought of lining them (especially when they are sgian dubh presentation boxes) with tartan material! This ties in well with the Scottish theme.

So I contacted Kathy Lare, a kilt maker living in New Mexico, and asked her if I could purchase several larger swatches of Universal tartans (tartans that can be worn by anyone without much contention, like Pride of Scotland, Royal Stewart, Irish National or Caledonia). She agreed and ended up sending me a generous amount of tartan that should keep me happy for a while.

I told the good doctor ordering this last box about my idea and asked if he would be interested in having a tartan lining. I indicated what I had available, but had a last-minute epiphany and also suggested if he had some of his own family tartan laying about that I could use that, instead!

He said he would be able to get some of his family tartan and forward it on to me tout suit!

Though I wish I'd had a bit more time to work on some additional features, like an inlay of some type in the lid, I'm quite pleased with the end result. Plus, it felt REALLY good to get back in the shop, even the freezing cold periods of working in the garage. 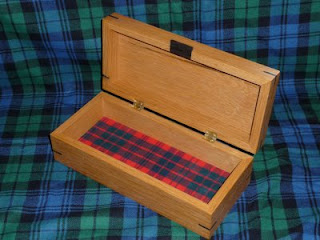