No, I didn't run a mile in under four and a half minutes or make a jewelry box (with dividers) in under five.

But I did pick up a new Record 52 1/2D Vise yesterday morning! 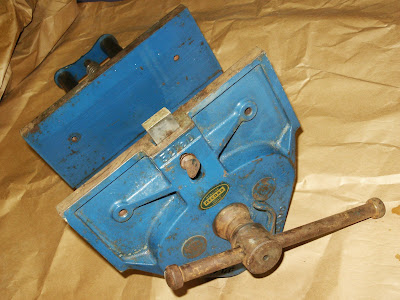 This wasn't really an "expected" purchase, so it did set back my plans to get the Veritas Small Plow Plane a bit, but... it was a deal I couldn't pass up.

See, I was trolling Craig's List the other day and I saw the listing, "Woodworking Vices". I didn't miss the humor in the double entendre. Having already decided to build myself a new workbench in the near future, I've started keeping my eye out for a bench vise. Having done my due diligence in vise research, I knew I was going to be looking for a Record 52 series model.

I noticed the listing contained a photo, so I opened it up to take a look. The image was from a bit of a distance, but it clearly showed two vises standing up on end, leaning against a garage door, the larger one being on the left and the smaller of the two on the right. The caption said, "Large vise - $60, Small vise - $30"

The smaller vise didn't really interest me - I believe it was an unmounted dog leg vise found on European benches and I don't want to mess with trying to install one of them. The larger vise, on the other hand, peaked my interest! It was blue (Record vises are blue)! But that was about all I could tell from the picture, so I shot a quick e-mail over to the seller and asked if there were any markings on the face of the vise.

Sure enough, he responded a little later that it was a Record 52 1/2D. 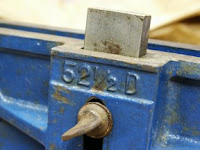 I did some quick checking on past E-Bay sales and posted a question on one of the woodworking forums I frequent (Sawmill Creek) before I responded with a resounding, "Barring any mechanical defects preventing the vise from working properly, I'll take it at your asking price!"

And then I was left with the job of trying to make the 1/2 hour trip to South St. Louis City without throwing a wrench in the weekend plans (my wife's mom is in town this weekend).

As fate would have it, they had talked earlier in the day (this was on Thursday) and the idea of going to the Botanical Gardens was brought up. "Ching, Ching," says I, as that is just five short minutes from the seller's house, on the other side of Tower Grove park!

"Hey, sweetie, I'd LOVE to go to the Botanical Gardens with you guys! You want me to drive?"

My wife doesn't care for driving too much in St. Louis, so I knew she'd jump at the offer. I guess my excitement was showing on my face, though, because she saw through me like a piece of plate glass.

"Oh, well... I might want to pick up a woodworking vise while we're down there," I reply.

"You already have enough woodworking vices!" she quipped.

Oh, my wife is such a joker! You can tell she's really messing with me when she glares through squinted eyes. Times like that, I wish she'd consider taking her act on the road for some comedy sketch group, you know? Man, she'd make a killing!

On Saturday morning, the clouds were out and rain threatened to fall in buckets, which might totally ruin our planned trip to the gardens, but... I was $60 poorer and happy as a clam! Sitting in the back of the car, carefully encased in two brown paper sacks was my new (old) Record vise.

And, in all honesty, another woodworking vice, I suppose...

(vise - n. any of various devices, usually having two jaws that may be brought together or separated by means of a screw, lever, or the like, used to hold an object firmly while work is being done.)

(vice - n. a fault, defect, or shortcoming; a bad habit, as in a horse; also the British spelling of the word vise.)
Posted by Ethan at 10:17 PM